In an effort to respond to the massive changes brought about by COVID-19 to our work life, such as an increase in working from home and an increase in virtual events, LinkedIn has rolled out a couple of new features for administrators of Company Pages. Let’s go over them today. 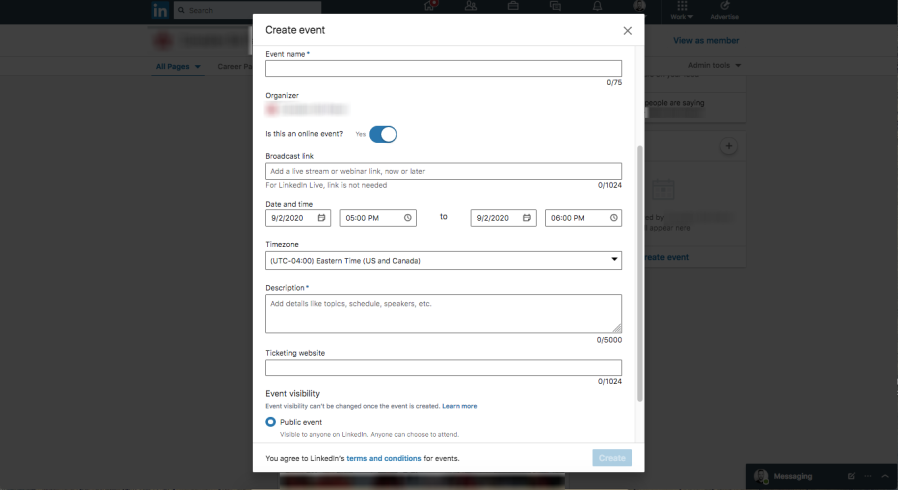 Company page admins now have the ability to create events. If you’ve ever created an event on Facebook the interface in the photo above will look pretty familiar. I think this is a great addition by LinkedIn. It will be very useful for the promotion of corporate events, launch events, online conferences and webinars.

With this new feature, you can now see, profile by profile, who’s following your company page. Before this update, you could only see a total number of followers and demographic breakdowns. On the topic of LinkedIn demographics, it’s worth pointing out that they offer a lot of useful insights and data. You can see where most of your followers are located, for example. This is useful if you have to concern yourself with an audience that’s based in multiple time zones. You can schedule posts to be posted at optimal times in your most populated time zones. In addition to location, you can also sort demographics by job function, seniority and company.

Connect with me on LinkedIn! I post regular video updates, where I share marketing tips and insights and more.

Evergreen content is the content on your company or a personal blog website that maintains relevancy and value for a long time such as months or years.

To find your best evergreen content, check your Google Analytics and find four or five of the most popular evergreen topics that your blog or website covers.

You can then start to think of ways to repurpose that content.

When you repurpose evergreen content, you can be assured that you’re already using content that’s proven itself on your website. With that knowledge, so you can be confident in that content’s ability to attract an audience when you repurpose and share it using other media and platforms.

I encourage you to get into the habit of re-sharing your content.

The harsh truth of the matter is that your audience will not see your post if you share it only a single time.

The algorithms are cruel.

This is particularly true on Facebook. Likewise on LinkedIn, while you may boast a few hundred connections, only a fraction of those are active on a daily basis. Many people go weeks without checking in on their LinkedIn feeds. Twitter feeds move at lightning speed. Your tweet will be gone in an instant.

Don’t feel as if you’re spamming people by re-sharing. If someone happens to have seen your post already, they’ll just scroll past and move on. They are unlikely to unfollow you unless you’re really blatant and sharing the same thing four or five times in a very short period of time.

As marketers, we need to put our ego aside. Yes, we do spend a lot of time on content calendars and planning themes, but many in our audience won’t even notice what we’re up to. They will only see an occasional, sporadic post. So while it’s good to plan, don’t get too attached to those plans and stop worrying about posting things out of order. Much of your audience are going to be jumping in midstream and won’t even realize the theme or the order of things you have planned.

Marketers need to be great visual storytellers. The reason for this is simple: photos and videos help to build trust with our audience.

If you’re struggling for inspiration here is a quick tip that has helped me in the past.

Whenever I’m out on public transit, whether it’s on the bus, train or metro, I like to take a look at the various advertisements inside the train carriages, outside at the stations and the on platforms.

On my phone there are dozens of photos of products and services that I have no intention of buying, but I’ve saved them, so that I can refer back to them when I need some inspiration for a design task.

Take a look around you next time you’re out on your commute or just riding the bus and have your smartphone camera ready, because you might find something that inspires you.

Many years ago Pages became the main avenue for brands on Facebook to connect with their audience.

However, Facebook Groups are once again becoming favoured with users because they present a much different dynamic than the one-way broadcast style of a standard page into the newsfeed.

With Facebook groups, users can start discussions of their own which makes for a much more organic feel to those conversations.

If you don’t have a Facebook group and you’re thinking about starting one, here are some quick tips get you on your way.